Yorkshire Forced Rhubarb is a national culinary treasure. You’ll find it on the smartest menus, in the best food shops and celebrated in the weekend food pages.

There’s been a real rhubarb renaissance in the past few years and this is mostly down to one remarkable Yorkshirewoman, fourth generation rhubarb grower Janet Oldroyd Hulme. Rhubarb sales had been falling since WW2 as imported fruit became more accessible, two hundred growers had shrunk to just eleven. Janet’s tireless campaigning, including a successful application for European PDO status, has put rhubarb back on the culinary map. The techniques for producing Yorkshire rhubarb haven’t changed in 140 years. The plants or crowns are grown outside for two years to build up energy reserves, to maximize this the crop isn’t harvested.

A final period of sub zero temperatures is essential. This converts the crown’s carbohydrate content to glucose, the only source of food when the plants are moved to the forcing sheds. The heated sheds trick the plant into thinking it’s spring and growth is rapid, the first crop is ready in about 5 weeks. Growing in complete darkness prevents photosynthesis which is why the stalks have such wonderful colour, tenderness and flavour.
Yorkshire Forced Rhubarb, no self respecting menu is complete without it. 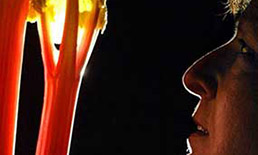 “Traditionally we have always dealt with the wholesale markets and working with Total Produce gets our rhubarb both to the markets and to the many chefs who demand it.”