Parsley Root is still much more popular in mainland Europe than in the UK but that really is changing. In the last few years we seem to have fallen for this rather splendid root and it’s cropping up on more and more menus. Most of our parsley root is imported via Rungis Market near Paris but one ground breaking British company have been growing it in Suffolk since 2013. Frederick Hiam grew their first parsley root for export but word soon got around over here and now there’s a growing demand from professional kitchens right across the UK.

The company has a long history of innovation. In 1892 the original Frederick Hiam, just 20 years old, started marketing vegetables from his family’s and neighbour’s farms through Spitafields and Covent Garden markets. Nowadays the company grow potatoes, brown & red onions, parsnips, carrots and, of course, parsley root. They still supply Spitafields and New Covent Garden as well other wholesale markets across the UK. They also export right across Europe and as far afield as Japan and Canada.

There’s an almost obsessive attention to detail at every stage of the growing, harvesting and packing processes because The Frederick Hiam brand is all about consistent quality. That’s as true today as it was in 1892. 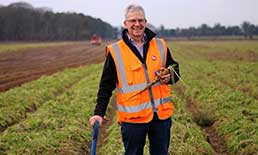 Frederick Hiam has relationships with the UK wholesale markets that go back over 100 years. Today we’re pleased to supply a number of Total Produce depots across the UK with our Market Fresh Vegetables.